The big news is, there’ll be nothing spectacular – up or down.

Right now, believe it or not, we are in the middle of an historic period in the UK residential Housing Market, a period of rare stability that has not seen prices change by more than 1% in any three-month period since November 2014. You’d have to go back more than 35 years to find a market that was so stable, over such a protracted period. Take a look at the chart below, I’ve pieced together the excellent Nationwide 3 months averaged price movement data to show the picture going back over the last ten years, one glance is enough to see how the market has become ‘becalmed’ over the last two years.

At the beginning of 2014, the super-hot market ignited by the introduction of Help To Buy the previous April finally started to cool. Only London, fuelled by speculation and overseas investors, continued to burn like an extravagant firework trying to defy the laws of gravity. Inflation in the capital touched 25% and kept the average figure for the UK artificially high through the early part of that year. But, even the most powerful of rockets must succumb eventually and fall back to earth.

Once London started to move more in line with the rest of the UK, the indices started to fall. And, by the autumn of 2014, the market had moved into a fragile state of equilibrium predicated on the underlying market conditions of high demand/low supply and low borrowing costs, but restrained by low transaction levels, low confidence and an uncertain outlook. It’s been that way ever since, but it’s a precarious balance.

I believe this new pattern in house price movements is with us for the foreseeable future – at least up until Article 50 is triggered in any case. I still can’t quite understand those who suggest the effects of leaving the EU have been nothing like we were told they would be. My favourite quote regarding Brexit and its effect on the UK economy came from the wily Charles Dunstone of Carphone Warehouse fame, “What I feel about Brexit is that it’s a little bit like we’ve jumped off a 100-storey building and have just passed the 50th floor and we’re saying, ‘Actually this isn’t so absolutely terrible’ — but we haven’t hit the pavement yet.”

Well, hit the pavement we will, and it’s way beyond me to predict the outcome of that crash landing, and, in my opinion, beyond the vast majority of those that make a living from doing precisely that. The trouble with pieces like this is they are generally cliché-ridden from top to bottom, so let me apologise in advance for this one, but it is tough to find anything better than ‘the calm before the storm’ to describe our position at the moment. For the purposes of this report, I am presuming the pavement will still be a little way off by the time next December rolls around.

Let’s focus on the short term, the next six months, to give us some of the background facts we need to determine how the market is going to move in 2017. Firstly, volumes.

We won’t know what the December volumes were until the HMRC publishes its data on January 21st, but it looks virtually certain that the total number of residential transactions in the UK in 2016 will be almost exactly the same as they were in 2015 – just over 1.2m. (And pretty much where they were in 2014 too – see the chart below) And, much like the RICS, I simply can’t see it being very different in 2017 either. Last year, aside from the crazy pre-budget rush in March to beat the hike in stamp duty for investors, when over 171K transactions took place, the monthly average settled back to around 100K and early indications show little signs of change.

There is another tax hike planned for property investors this year too, as tax relief is removed for investors and buy-to-let borrowers. The big difference with this one is that there won’t be any great stampede to buy property before it happens. In fact, it seems likely that the reverse will be true. Small investors in particular, on tight margins and high levels of borrowing, may well look to reduce their exposure, especially if they can secure a capital gain on disposal.

This won’t necessarily have an adverse effect on the market. I have said in the past that even if some of the more wildly pessimistic estimates are to be believed, and we see 200,000 properties flood on to the market as a result, the negative effects would only be temporary. In fact, I believe that greater availability would increase activity and improve market conditions thereby lifting volumes in the longer term.

According to the RICS, estate agents’ stocks are at, or close to, an historic low, unable to meet demand pretty much right across the country. And yet prices stay relatively static. I referred to this idiosyncrasy of the housing market in my piece last year and the facts from 2016 bear that theory out. More supply would lift volumes and create demand, thereby under-pinning prices, up to a point.

I feel confident we won’t see any material increase in volumes in 2017. In fact, I believe we’ll see a slight decrease as consumer confidence continues to slide and mortgages get more expensive and slightly more difficult to come by. The chart below shows my 2017 prediction that transaction numbers with a value higher than £40K will fall to around 1.2m next year with a significant dip in the summer months. 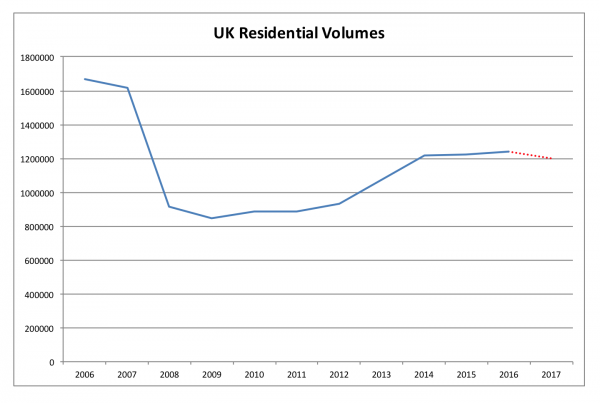 The charts above illustrate how stable the market is at the moment and given the unlikely nature of a sharp change in supply or sales volumes, we need to consider other factors when predicting how prices will shift over the next 6 to 12 months. The first of these should be interest rates. Simply because interest rates affect so many other factors involved in the typical decision making process of the average UK homebuyer.

In August of 2016 we saw rates fall from their historically low level of 0.5% to a new low of 0.25%, along with the announcement of another substantial round of quantitative easing and £100 billion worth of Term Funding (similar to the Funding For Lending Scheme introduced back in August 2012), to enable the lenders to pass some of the benefits of these new low rates on to borrowers.

There has been much talk about the change of the political landscape in the US and it was well reported that Janet Yellen, the Chairman of the Federal Reserve has her eyes on a target range of 0.5% to 0.75%. This will undoubtedly put upwards pressure on rates – but not much. Inflation doesn’t seem set to gallop away anytime soon, so, if there is a rise in 2017 – and I think there is every chance there might be – it will be small and more of a shot across the bows than anything else. It would affect consumer confidence though, and that does matter. 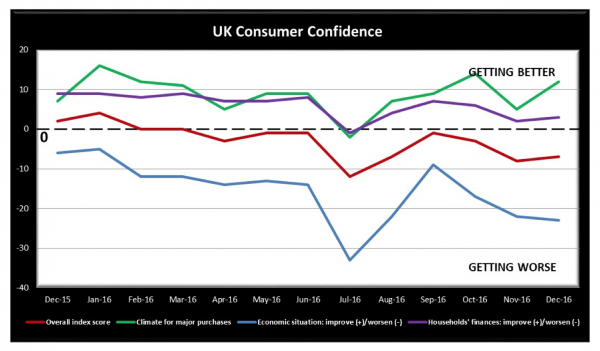 The first-class Consumer Confidence survey carried out by GfK/NOP on behalf of the European Union was notable last year for two things. Firstly, the massive dip in the immediate aftermath of the Brexit vote on June 23rd (and its almost immediate recovery after!) and the slow but steady decline in confidence levels in both the economy (the blue line above) and people’s household finances (the mauve line above). Only the public’s view that now is a pretty good time to make a major purchase (the green line), which probably has much to do with low cost of finance, has slowed the inevitable decline of the overall index (the red line), but nevertheless, it has dropped by almost ten points over the course of the year and that is significant.

I have been tracking this survey for years and have found it to be a breathtakingly accurate bellwether of the UK market. That very gradual but definite move of the overall index score from positive into negative points to exactly how I believe the market will behave over the next 12 months.

I have long complained that those predicting prices never name the index against which their predictions should be measured, thereby giving them huge leeway – the difference was as much as 5% last year – I lost confidence in the Halifax survey a couple of years ago and chose my reference point as the Nationwide, for its consistency and accurate reflection of mood and activity.

There is an important point to be made here. Many commentators use social media to rubbish the publishing of forecasts and average price predictions and question their usefulness. I believe they are missing the point. I fully accept that price movements last year varied wildly from Cambridge to Cardiff, but both markets perform against the backdrop of overall market sentiment and it is the shift in that sentiment that is a critical factor for those of us working in the industry. It touches pretty much everything we do and everything we need to be aware of from land prices through to cost and availability of labour, because it advises decisions being made by all the stakeholders in the industry.

As an example, note the action of UK’s Big Three Builders on June 24th. They all independently concluded that the uncertainty created by the Brexit vote meant that they would put on hold all land purchases that hadn’t gone to contract. Between them, these companies construct around 45,000 homes a year, around a third of the total. Just imagine the effect that had on the UK land market. Sentiment matters and the forecasting and reporting of UK prices and activity dramatically affects sentiment.

Although the market continues to be uncharacteristically stable, I believe there is still a reluctance to commit. A reluctance to give up great fixed rates by moving house. And for those living more than 100 miles from London, a reluctance to sell in a market that has dramatically failed to live up to its potential over the past three years.

For new homes buyers, it has been confirmed that Help To Buy is with us until 2021 and Sir Edward Lister assures us the HCA will invest £3 billion to help fund the small to medium developers to build more and a further £2 billion to kick start brownfield development, we’ll see. But I do see the new homes share of the market will move slightly above its long run average and maybe see spec. sales even exceed 11% of the total at around 135K.

I believe the London market will continue to slow its rate of growth in 2017 and while I think it’s unlikely that there will be negative growth in the Capital in the year, it will feel like deflation for optimistic sellers as the ambition is cruelly dashed from their over enthusiastic asking prices conceived on the dramatic up curve. I predict neutral growth in this critical market.

For the overall UK average index value, while I believe there will still be inflation in the market in 2017, the rate will continue to slow and I anticipate the annualised increase decreasing to around 3.5% by the half year. The market in the second half is, as ever, much tougher to call. But, as things stand, it’s hard to see any picture than a further slowing of inflation and I anticipate the final UK average price (according to the Nationwide index) increasing by between 1% and 2% for the year.

Since 1985 Matt Fleming has been CEO of Aylesworth Fleming Limited, a property marketing specialist agency. He works with many of the UK’s new homes developers and the country’s major estate agencies. In January 2016 he predicted the Nationwide index to rise between 4% and 5% in the year ahead, its actual 4.5% rise enhanced his reputation as an accomplished reader of the market.

Property predictions for 2016 – the results are in
Scroll to top