Every year, before I sit down to collate my thoughts on where the market is headed for the year ahead, I consider my forecast for the previous year and take a look at the key metrics to see how accurate my numbers were.

The headline predictions in my document were;

I’m delighted to say, the market proved to be a little more resilient than I anticipated, even in the Capital where prices were supported by continuing foreign investment and weaker exchange rates. However, those headwinds grow ever stronger; the political position has deteriorated and confidence continues to fall.

Let’s start with the predicted volume of total UK residential transactions. The new year started with one of the most downbeat RICS surveys in recent years and it made headlines in the press, on social media, radio and on TV. I have warned in the past about relying too heavily on this particular survey for short and mid-term strategy, advice the media tends to ignore. It’s generally a small sample size and the regions are fairly big, so just one downbeat agency group can have a dramatic effect on the outcome. Nevertheless, an RICS survey that is so negative in its outlook cannot be ignored. East Anglia apart, a significant balance of agents reported a decrease in new vendor instructions in every region in England. 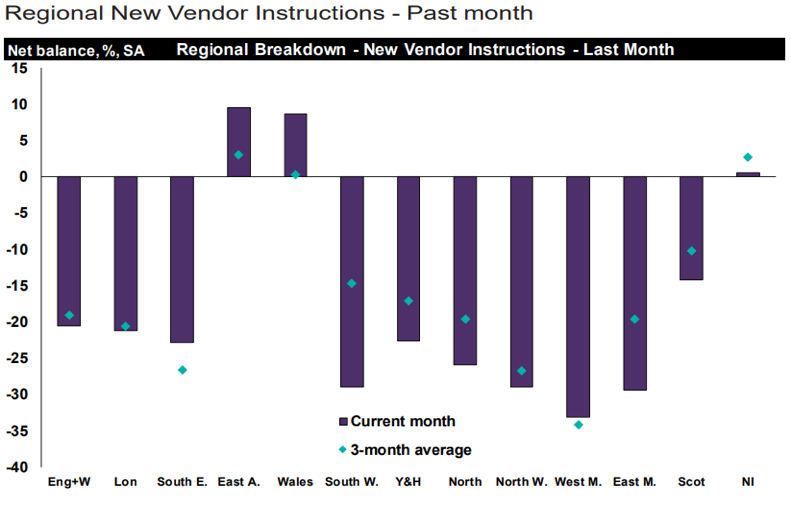 This level of negative sentiment among the agents suggests to me that we’ll continue to see the sluggish volumes that have characterised the market over the last ten years. It is worth remembering that annual transaction volumes were over 1.8M in the years just prior to the recession, but we live in a different world now, one affected by uncertainty and lack of confidence. The figures for residential property transactions for 2018 have just been published by the HMRC and they come as no surprise, provisional figures show an annual total of 1.19M – a fall of around 2.5% from the previous year.

The extraordinary political landscape and the unpredictable nature of the Brexit debate has seen consumer confidence in the UK economy continue to fall, particularly since the referendum. Those who have read my forecasts down the years will know how much faith I have in the GfK/NOP index – the index measuring faith in the UK economy paints a grim picture; in December it stood at almost -40, over ten points lower than this time last year. And the lowest since 2009. 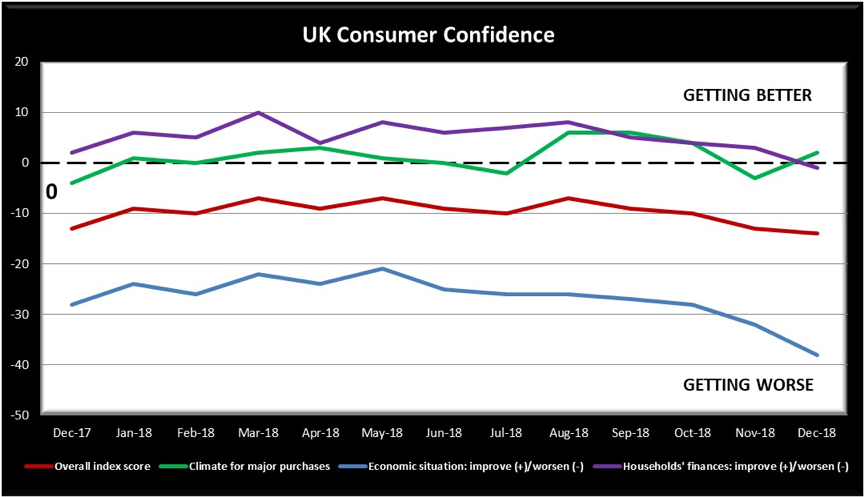 In my housing market forecast last January, I wrote this:

Both prices and volumes have a history of following major shifts in trends and it is important to note that as the [Consumer Confidence – UK economy] index recovered from historic lows following the crash in 2008/9, it never got above +5 before it started to fall back in the wake of the BREXIT uncertainty. This negative sentiment is a key factor in residential transactions remaining static at around 1.2 million per annum since 2014 and I forecast 2018 will be no different.

Although it is hard to believe, on the Brexit front, we are no further on now than we were then, and those words apply equally well this year as they did last. I cannot believe any market commentator is genuinely confident about predicting how the market will react once the Brexit position has unravelled, particularly if we crash out of the Union without a deal – something that is a very real possibility now. So, this year, there’s a caveat to my forecasts for both volume and values – leaving the EU without a deal will undoubtedly affect the market, the availability of mortgage finance is a big factor in market movements and this could be significantly affected. I plan to reforecast at the end of April once the outcome, and its consequences, are known; or, at least, are a little easier to predict.

Regardless of the Brexit deal – or no deal – I believe the shift in the private new homes share of the overall market will continue to grow, at least until we see the end of Help to Buy. Last year it rose to almost 13% and I believe it will break through that threshold this year.

I forecast the volume of UK Residential transactions will be 1.17 million for 2019 and the private new homes share of that market will be around 13.5% giving a total volume of around 157k private new home completions.

So, if volumes remain static, where will values go?

Prices will continue to come under pressure in London and the South East. The fallout from the changes in SDLT (Stamp Duty Land Tax) from 2014 onwards depressed the market over £1M more significantly than many imagined it would at the time, and then the fall in confidence took over before the market got used to the increased taxation. I believe this key market, and that of the investor buyer, will continue their steady downward drift. There IS still a market in this sector, sellers have just got to work a bit harder.

The East and West Midlands, Wales and Yorkshire – and Northern Ireland of course – all did better than I anticipated last year, those markets have a much higher proportion of FTB’s (first-time buyers) than in the South East and London and, in most cases, FTB’s pay no SDLT at all. FTB’s add fluidity to the market, enabling chains to complete. In addition, prices are lower and homes are more affordable, but I still believe there will be attrition in 2019. I anticipate values in these regional markets will still be in positive growth at the end of 2019, but only just. The other UK regions, which were only just the right side of the line last year seem certain to slip into negative growth.

Let’s put Brexit to one side for a moment; but let’s assume consumer confidence will continue to fall according to the trend established over the last three years, so probably ending the year close to -50 on GfK/NOP measure – its lowest for almost a decade – and let’s look at the other factors that have a direct effect on property prices.

We’ll start with mortgage finance, not just interest rates, but mortgage availability too, one of the biggest influencers on the market. It seems likely that there’ll be rate rises during 2019, but probably not more than one or two, and probably amounting to no more than 50 basis points or, 0.5% in old money. My contacts in the financial services sector tell me that mortgage availability is unlikely to be impaired over the next 12 months (unless Brexit brings something unforeseen), so mortgage product availability seems set to remain at a relatively high level and at a relatively low cost.

Despite all the gloom and uncertainty surrounding Brexit, the economy continues to grow and, once again, major shocks aside, looks sets for another year of growth, albeit modest. The UK labour market remains relatively buoyant with record numbers in work, and with signs of real wage growth as the year drew to a close. Unemployment is forecast to grow, but only slightly, with experts suggesting we could see it reaching 1.5 million by the end of 2019.

Consequently, there is little – other than the small matter of Brexit – to throw the market off-track from the trend it has established over the past three or four years, both in terms of volume and value. Volumes we can be confident are very stable at just under 1.2M transactions per annum, but what is the trend on values?

One of my favourite market indicators is the Nationwide ‘3 months on previous 3 months % change’. By measuring the market movement quarterly, some of the spikes are taken out and trends become easier to spot. A glance at the December chart, which shows the market movement over the previous three years, even allowing for the peaks and troughs of June 17 and June 18, shows an unmistakable trend. (The red line indicating the three-year trend is my addition.) 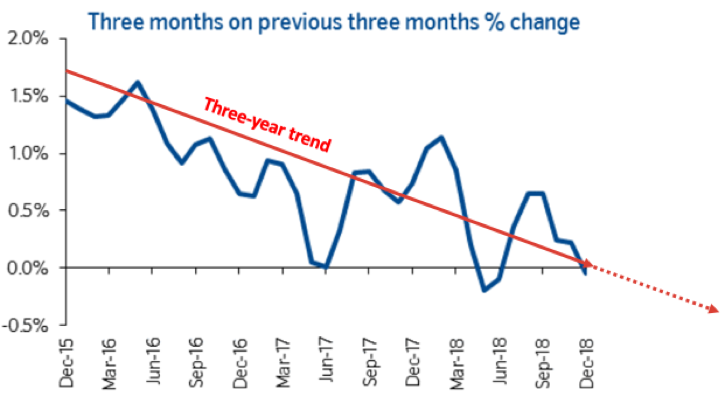 Extending the trend-line I have applied to Nationwide’s chart, it suggests that the 3-month on 3-month % change will be around -0.5% by the end of 2019, an annual rate of around -2%. Last year I predicted negative price growth in the UK market for the first time in many years and, although we didn’t quite slide into the red in 2018, that trend suggests it’s almost certainly going to be the case this year.

It is impossible to predict the outcome of the Brexit negotiations, so I have based my market forecast on the assumption that it doesn’t severely disrupt the pattern of the market, in either direction. I forecast that house-price inflation in the UK, according to the Nationwide index, will end 2019 at between -1.5% and -2.5%.

I plan to re-assess the prospects for the 2019 market as soon as the Brexit negotiations and the UK’s withdrawal from the European Union are concluded, and I will publish an updated forecast at that time. Up until then I am confident that we will see a continuation of the pattern established over the past five years, both in terms of transaction numbers and selling prices.

In 1985 Matt Fleming founded Aylesworth Fleming Limited, one of the UK’s leading property marketing agencies and he is still retained as its Residential Property Consultant. He works with many of the UK’s new homes developers and the country’s major estate agencies. He has an enviable track record of exceptionally accurate forecasts of the market over the last ten years.