Despite a brutal first half, I’m sticking by my prediction for the final score.

I originally sat down at the end of June to write this update to my 2019 Housing Market forecast but, even by the standards of these uncertain times, things were truly in the balance, with a new prime minister about to arrive and everything that might mean to the market. I felt it was worth delaying it by a month to see if the winner was going to make a substantial difference.

Sure enough, we ended up with Boris and one of his first pronouncements was a review of the Stamp Duty Land Tax rates! Many commentators believe the delay between this announcement and the implementation of any change could have a disastrous effect on the market, resulting in a state of paralysis while buyers wait for a potential reduction in tax – particularly in the already hard-pressed £1m plus segment.

I agree that there will be an effect, but I don’t think it will be as severe as some would have us believe. I enjoy reading the observations of the property pundits like Henry Pryor and Anne Ashworth, but they exist in the London bubble, they are obsessed with values, quality of investment and the financial aspects of the buying process.

They overlook the fact that for the great majority of homebuyers, there are more important things to consider than whether they are buying at the top or the bottom of the ‘value curve’. Quality of life, the commute, the children’s education, the wellbeing of the family, more space for a new arrival. These considerations are powerful drivers and they don’t stop because prices in London have tumbled.

Notwithstanding the natural demand created in the market by people just living their lives, the volume of transactions in the UK has remained static for almost five years, stuck at around 1.2 million per annum. In my forecast at the beginning of the year, I wrote;

I forecast the volume of UK Residential transactions will be 1.17 million for 2019 and the private new homes share of that market will be around 13.5% giving a total volume of around 157k private new home completions.

At the halfway point for 2019, the seasonally adjusted total was 566,790, according to HMRC. Up until the Boris Johnson SDLT announcement, this looked bang on track to deliver exactly that total. There will undoubtedly be a negative effect, while buyers wait and see, but that will be balanced by an increase as and when the changes are introduced. In light of these changes, I’m going to revise my forecast, but only down to 1.07 million.

The useful RICS monthly survey of members is a good bellwether of anticipated volumes. I always counsel care when reviewing the data because of the relatively low sample sizes, but movement in this metric is a good indicator of trends and it is clear from the regional survey of Sales Expectations that there are still hotspots where the agents believe they will see growth over the summer. These include the East Midlands and East Anglia, but particularly the North West, where the mood is bullish in the extreme. It seems that much of the investor money earmarked for the Capital has been diverted north and Manchester is seeing the lion’s share. But there is also big investment in Leeds at the moment and I forecast it’ll also be one of the big success stories of the next five years.

Despite the obvious uncertainty over SDLT and the headwinds in the upper-price level, I will be very surprised if volumes drop below the million mark in 2019, as some are forecasting, and I’m very confident about my revised forecast.

If the volumes remain static, how about values? In my original forecast and the beginning of the year I wrote;

I forecast that house-price inflation in the UK, according to the Nationwide index, will end 2019 at between -1.5% and -2.5%

I always caveat my forecasts with the right to revise at the half-year point, and I don’t mind admitting that prices have held up a little better than I thought in the first half. As at the end of June, the Nationwide Index stood at +0.5%. I thought it was going to slip into negative territory by this point. But, it’s not far from where I predicted and there are considerable headwinds facing us as we look forward to the second half.

The Nationwide Regional Index below, shows the extent of the variations throughout the UK and I don’t think we’ve seen the full adjustment in London and the South East yet, and that will bring the average down considerably. 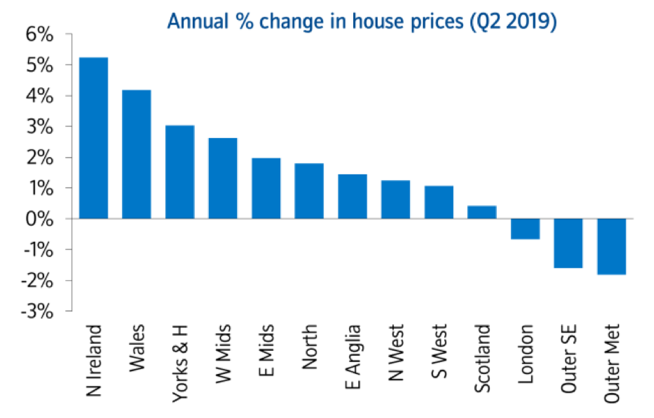 On the positive side, interest rates and availability of finance have a big influence on prices and there is very little chance we’ll see any increase in rates given the need to cushion any negative effects of BREXIT. My contacts in the financial services sector assure me that availability of mortgages will remain at the current level for the rest of the year too. So, I don’t anticipate any bad news on that front.

Extraordinary as it may sound, Consumer Confidence has also given me cause for a little optimism. Although it continues to bump along the base of a ten-year low, the public’s outlook for their own personal finances or whether it’s a good time to make a major purchase, hasn’t moved from that position since the BREXIT referendum result (see the green and mauve lines in the chart below) and, as I have said on many occasions, it’s the change in the index that really matters – rather than the raw numbers of the index itself. On that basis, it’s safe to assume that while consumers undoubtedly believe there may be trouble ahead, they have already factored that into their thinking; deal or no deal. 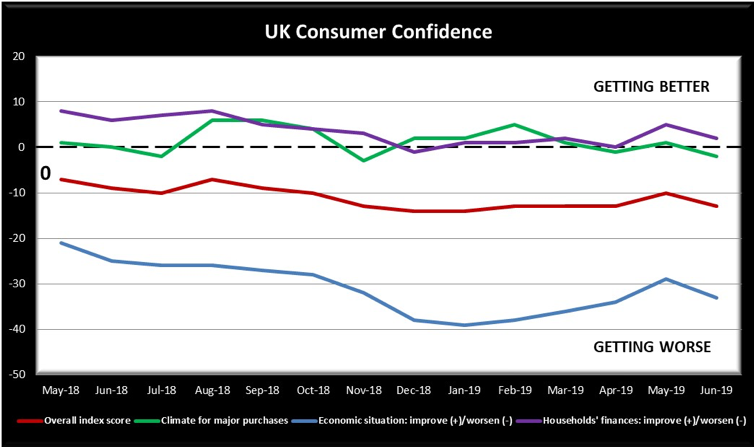 All things considered, I think we are going to stay on the course that seemed so inevitable at the start of the year. I accept that, so far, the slope might have been a little gentler than that I anticipated back in January, but I am going to stay with my forecast that house-price inflation in the UK, according to the Nationwide index, will end 2019 at between -1.5% and -2.5%.

I feel very confident that there won’t be many agents, pundits or commentators – those that are prepared to attach their forecast to a specific index – that will be closer than me. And, as for 2020? Ask me next January!